It's Tuesday now, I got home after a long drive last night, the con has been over for two days, but I'm still feeling it's affects. This was my first venture to Charlotte and the Heroes Convention. I had heard many great things about this show, my expectations were high, and I was not disappointed. This is a really great show.

The Wednesday before the event, Zack Kruse, creator of The Contingent and the upcoming webcomic Mystery Solved!, a burgeoning comics writer, Steve DItko enthusiast, and raconteur, travelled from his home in northern Indiana to my apartment in Cincinnati. We had some dinner at a local Irish pub, packed up the car, then stayed up way too late talking and gossiping like teenage girls. Early the next morning, we set out for North Carolina. It wasn't too bad of a drive. Long, sure, a little over 8 hours, but the trip through the foothills and Appalachian Mountains gave us plenty to looks at as we curved our way up and down the tree covered landscape. Sharing a harrowing turn at the top of one of those ancient hills at 60 mph alongside a speeding tractor trailer weighed down with military equipment is all part of the adventure. The conversation with Zack was sometimes silly, sometimes insightful, and always entertaining. His Pee Wee impersonation is dead on. So in all, the trip seemed to fly by. It would have been a lot less without the quality company and it sure beats the hell out of flying.

After checking in to the luxurious Days Inn motel, we were soon met by our third roommate and pal Tony Guagliardo. Hailing from a tiny village called New York City, Tony and I have roomed together previously, including San Diego Comicon last year, so I know that he doesn't snore too loud or fart too much. I'm not sure the fellas can say the same of me. We're too late for the Comic Geek Speak get together at the Golden Corral, so we start walking and find The Fox and Hound. The name and exterior suggest an English style pub. However, the walls of televisions, girls serving in skimpy outfits, techno beat pop music, and over priced Mexican party food suggest more of an American sports bar. Still, it's the company that counts and Zack and Tony are good peeps. After that we head to The Westin, where anyone whose anyone knows to go for expensive beers and cheap conversation.

Up early, too damn early, on Friday to set up the table. Drive into the convention center, unload, and find our table number. Here's where bad news turns into an unexpected bonus. Finding our table number, the space is filled with somebody else's supplies. The owner of said items vehemently tells us that it's his table and he has the paperwork to prove it. I didn't need convincing, I've had cons mix things up on me plenty, so Zack and I talk to the show organizers who are courteous and apologetic and scurry to find us a new table. I had to take the car back to the hotel and hoof it in a hurry that mile back to the show in hopes of getting set up before the doors flew open. By the time I arrive, a new table has been assigned. Our original location was in the Small Press area, sort of the show ghetto, back aisle, with a beautiful view of the exit doors. Our new table location, however, is a corner spot along a heavily trafficked aisle in the middle of Artist Alley, across from comic art legends Michael Golden and Mark Texeira. Crisis becomes opportunity: Crisitunity.

This has been Part 1 of the Heroes Con 2009 report. Part 2 coming soon. Until then, a few pics. More pics can be found on my flickr account. 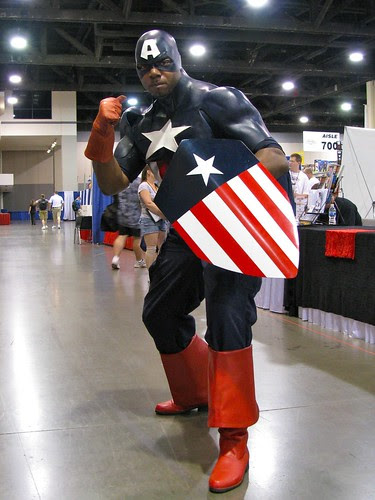 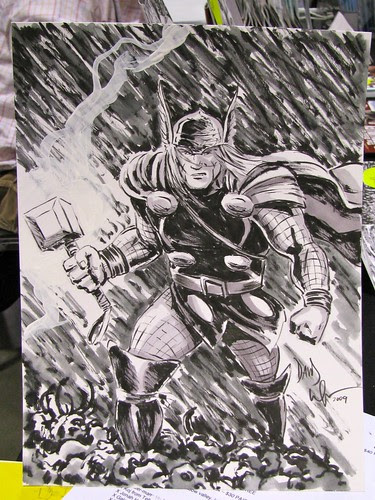 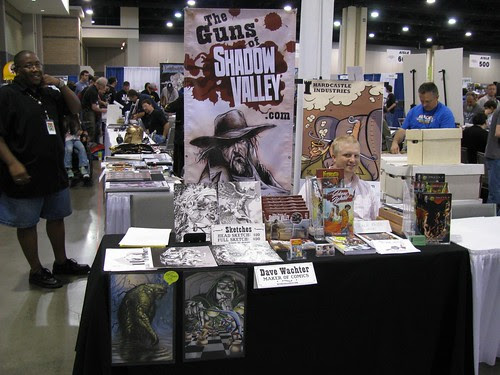 Posted by DaveWachter at 4:49 PM