Death and Dream and Nova and Thanos 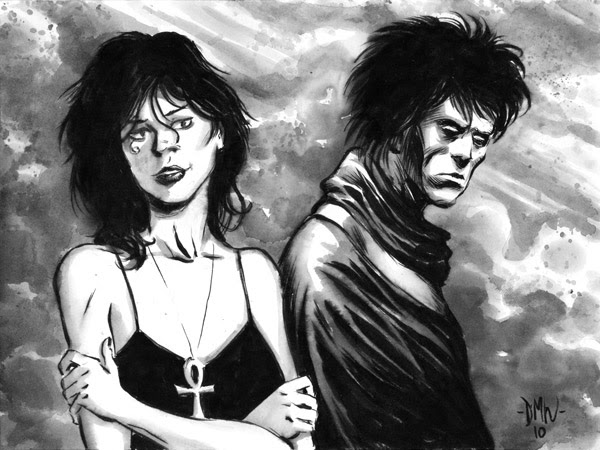 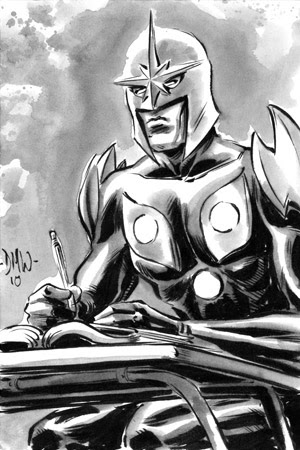 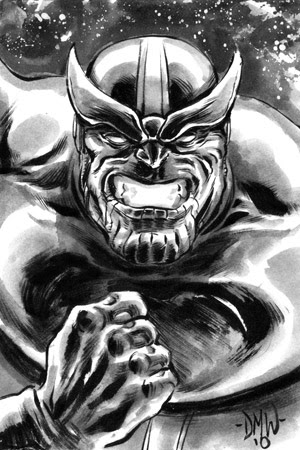 Posted by DaveWachter at 8:36 AM 2 comments:

I'm back from CGS Supershow, but still feeling it's affects on mind and body. This was my first con of the year and it was the perfect way to kick off the con season. The bar has been set high for all the other events I'll be attending.

Amber and I drove in from Pittsburgh on Friday, went straight to the con center and set up the booth. We were immediately greeted by some of the CGS Geeks who run the show. I see a few of these guys at a time at cons throughout the year, it's nice to see Bryan, Peter, Pants, Shane, Murd, Jamie, Kevin, and Matt all in one place. I've got a new booth setup this year to show off the new items I'm peddling. When we got it all set up, I was really quite proud with how it all looked. We stayed at the nearby Days Inn, where the lobby seemed to be constantly full of convention goes meeting and reuniting. From the room window I saw some buddies of mine, Vince B, Tony G, and Marty, together down in the parking lot. My attempt to whistle down to them was pitiful, instead I just snapped their pics with the zoom as they gathered around Tony's open car trunk. I don't know what they were doing, but it looked mighty suspicious, so I documented it in case the authorities came a calling! Since Amber is vegetarian, we went to a local Thai restaurant which was recommended to us, called ThaiWatt, I believe. It was quite nice. From there, we were on the the first night's festivities at the show pre-party at 3rd and Spruce. The CGS guys had rented it out for both nights of the show. These get-togethers are awesome because I'm usually so busy at the show that I don't get to talk with everybody. The place was packed, I tried to circulate but there was so many people there, it was impossible to talk to everyone. I had to be careful not to kill my voice that first night. Tons of fun, and a great way to kick things off.

Saturday, day one. The early hours of the show seem to be the time for everyone to come by and catch up. My sketch list for the entire weekend was filling rapidly and by that afternoon it was full. I was worried I wouldn't be able to get them all done, especially since with all the chatting and selling of shirts, books, and prints, I didn't get the first sketch done until almost 2 in the afternoon! Luckily I was able to pick up the pace and get everything done by the end of the weekend. Amber started by wearing her cowgirl outfit, along with the new Guns of Shadow Valley t-shirt I designed. I really think that seeing it handsomely displayed on her was how I was able to sell so many shirts! Later she changed into her ultra pink Star Saffire costume. That one really blew a lot people away, especially the dudes. The last day she wore her Steampunk Alice in Wonderland outfit, which is so darned cute I can hardly believe it. The guys were all about talking to her and getting her picture. I wasn't jealous at all. Nope. Not a bit. Not one itty bitty bit. You believe me, right?

Saturday night was back to 3rd and Spruce. But this time, thanks to the efforts of Amber and Jon Carroll, along with Kyle Minor who helped MC, there was Karaoke! Anyone who knows me knows I'm a big attention starved ham, so I had to do a rendition of Boy Named Sue, the Johnny Cash classic. It went over well, I think. I didn't mess it up too bad. Not like my second effort, which I'm not going to talk about. Nope. I was worried whether Karaoke would work in the place, but it went over great and lots of people got into the spirit. I was really surprised by the passion CGS host Pants displayed, and the skill of Murd's vocal cords. Amber sang a spirited rendition of Bonnie Raitt's 'Something to Talk About.' I was proud. A really great night.

By Sunday I was tired, but the show must go on! A big McDonald's coffee helped. Plenty of sketches to finish. I had taken some time in the hotel room Saturday night to help catch up, I think that's what saved me. I did sit on one of the panels. "The Making Independent Comics panel?" you ask? Nope, not that one. "How about the Creating Webcomics panel?" No, no, silly, why would I do that?! That afternoon I was on the Costumes and Costuming panel, hosted by the costume goddess herself, Amber. I was on the panel with Mike Norton, Jamal Igle, and a stormtrooper from the 501st. As an artist I talked a bit about designing costumes for characters, and the research it takes to create time period specific costumes. Amber did a fantastic job putting that panel together and hosting it. I managed to squeeze in a few minutes close to the end of the show to walk around the floor and visit some tables just before everyone packed up. Then we said all of our goodbyes. Sunday is always a bittersweet time.

Amber and I drove straight from the show back to Pittsburgh through heavy rain and thick fog. Exhausted, we finally made it in around 10:30 at night. I was ready to collapse. I literally rolled out of the driver's seat. These trips can be taxing and I'm not getting any younger. Good thing the companionship was wonderful. The trip wouldn't have been as nearly fun or successful without her. I'm a lucky guy.

The CGS Supershow is a highlight event for me. I did a lot of sketches, and sold plenty of merchandise. In that way it was successful, but more importantly I got to catch up with so many friends that I see far too rarely, and make a bunch of new friendships that I think will last quite some time. It was so utterly terrific to see everybody and I'm so thankful for the opportunity to be a part of this outstanding show and community. I can't wait for next year!!!
Posted by DaveWachter at 1:02 PM 3 comments: 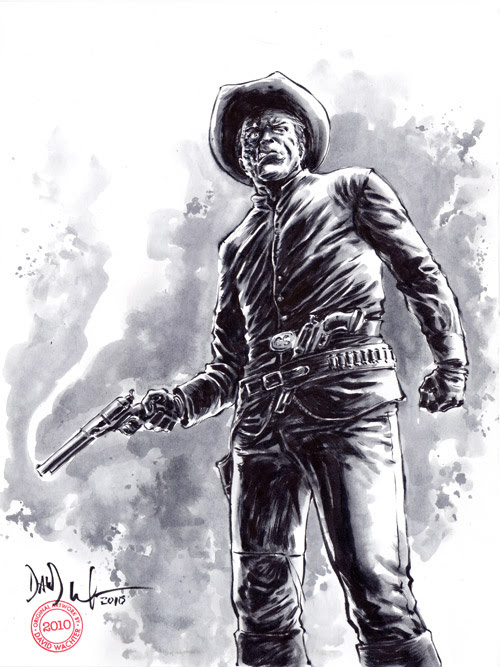 Here's another pre-order I did for the CGS SUpershow. It was a terrific con, as always. I had a great time, did a lot of business, saw a ton of friends, and made a bunch of new ones. I'm back from the show and I've posted my pics on my Facebook page. Check it out!

Monsieur Mallah and The Joker 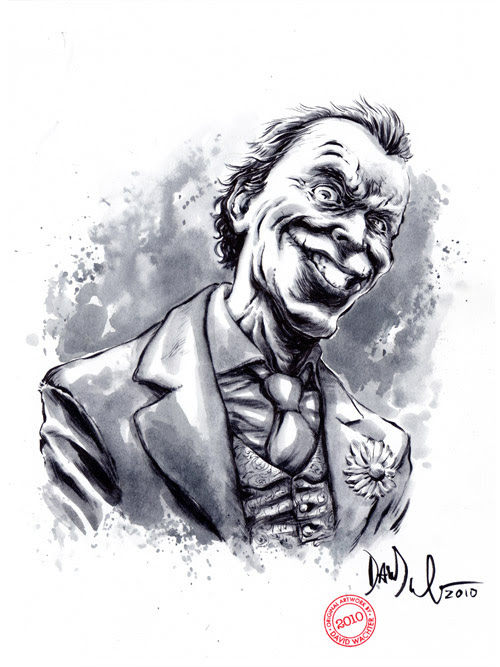 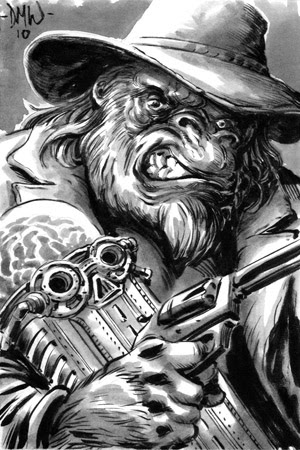 Two more for Supershow! Monsieur Mallah and the Brain are done Old West style, in case you were wondering.
Posted by DaveWachter at 11:42 AM 2 comments: 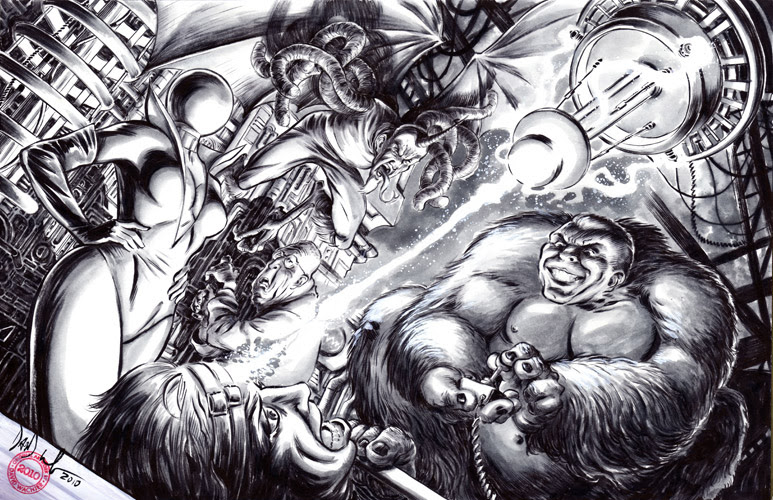 Again for Supershow, a full 17x11 commission of one of the strangest groups of villains, The Headmen. Defenders beware!
Posted by DaveWachter at 8:50 AM 3 comments: 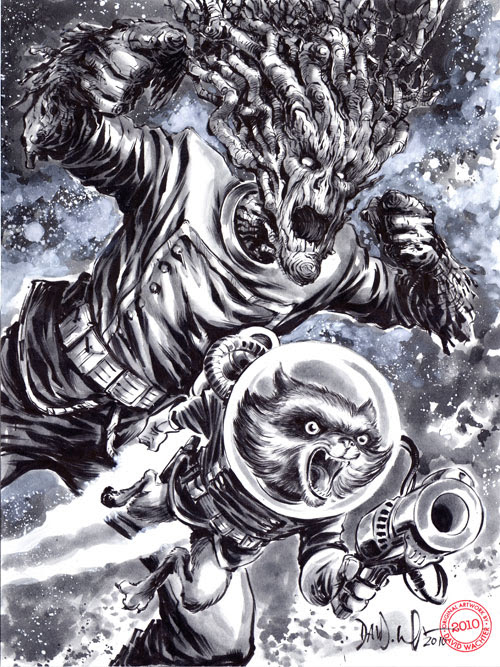 Just 4 more days until CGS Supershow!
Posted by DaveWachter at 10:26 AM 1 comment: 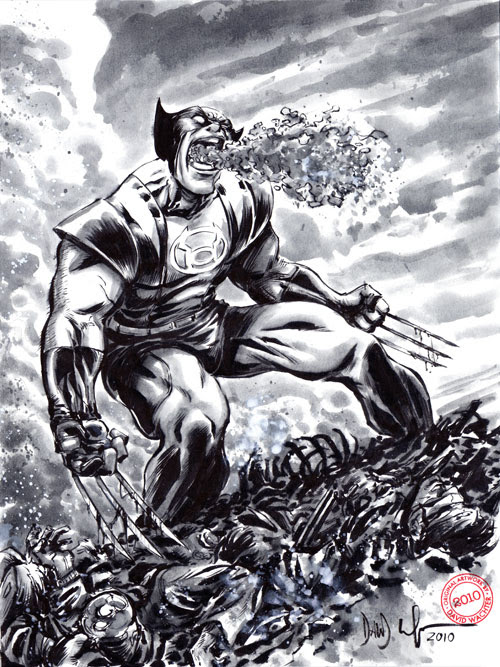 Have a great weekend, everybody!
Posted by DaveWachter at 8:42 AM 2 comments: 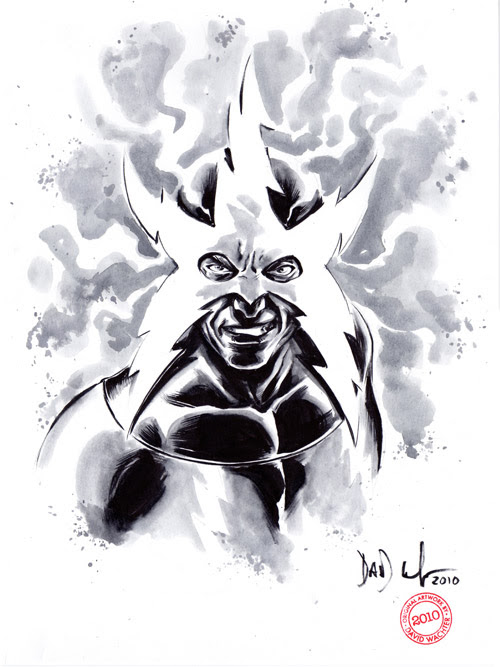 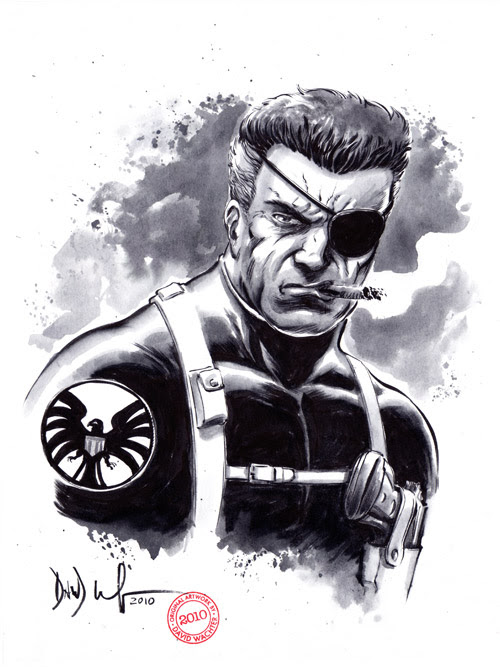 Two more for the SuperShow.
Posted by DaveWachter at 11:35 AM 2 comments: 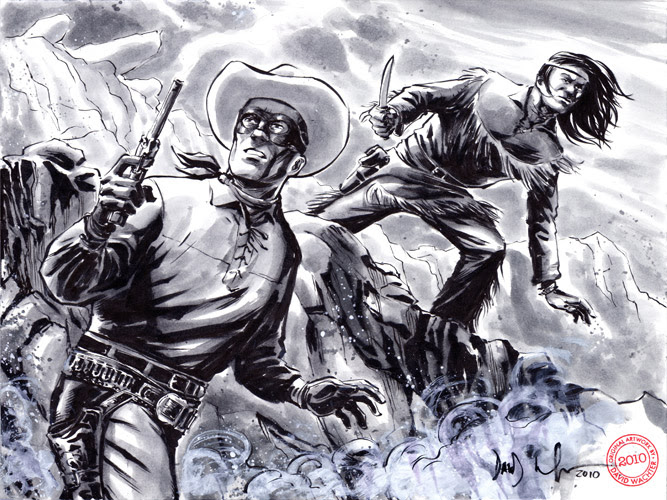 Another CGS Supershow pre-order.
Posted by DaveWachter at 9:24 AM 3 comments: 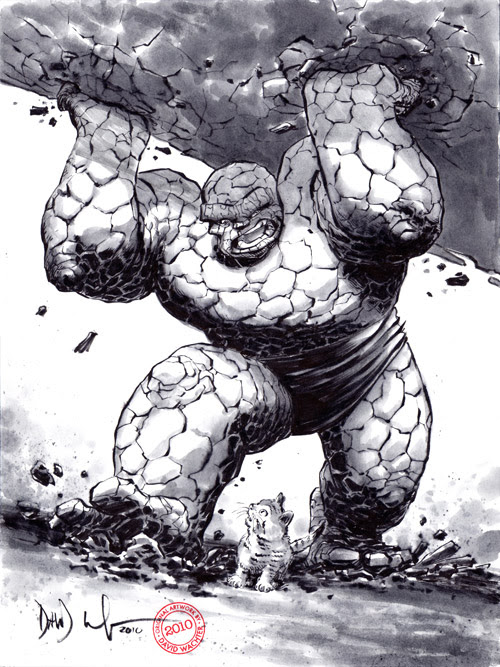 This is the next pre-order for CGS Supershow. Yep, he's saving a kitty. Ben's such a softy.
Posted by DaveWachter at 8:45 AM 4 comments: 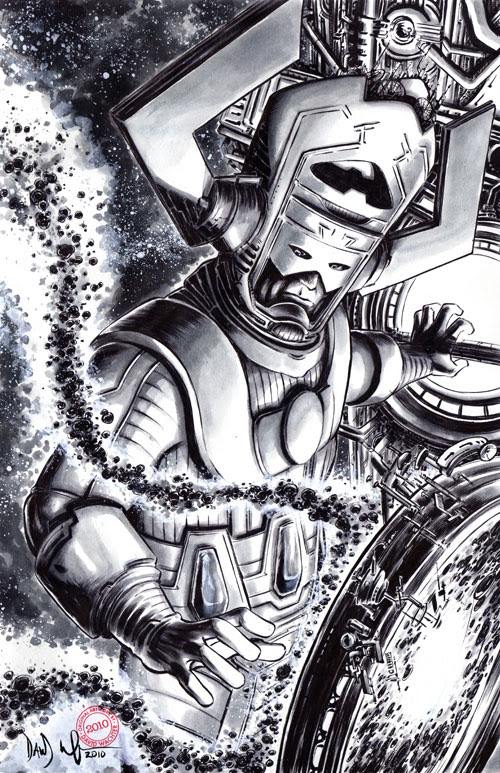 I love to draw the Devourer of Worlds, although I may have gone a little crazy on the detail with this one. This is the first of my CGS Supershow Pre-orders. If you're planning to attend the Comic Geek Speak SuperShow convention and you want to pre-order a piece of your own, you can check out my offerings here.
Posted by DaveWachter at 8:49 AM 4 comments: 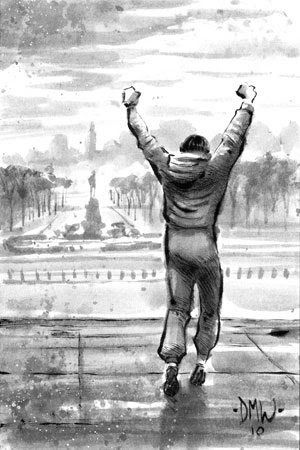 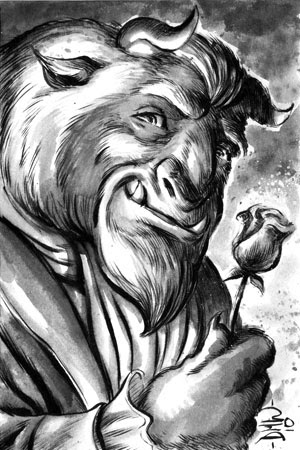 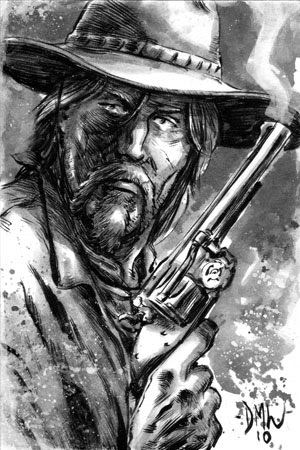 I know it's been quite a while since my last post, I've been busy trying to keep up with pages for The Guns of Shadow Valley. Anyway, here's a few mini sketches, the first two done for Haitian earthquake relief, the last for the Guns Comments Contest.
Posted by DaveWachter at 1:30 PM 1 comment: