Out with the Old

Wow, it's an actual blog post! Yeah, I thought I'd end out the year with one of these rarities. 2010 was a wonderful, confusing, horrible, and strange year for me. I experienced the highest highs and the lowest lows of my life this year. It will certainly be memorable, but I'm more than happy to kick it to the curb and look forward to 2011. I'll be working toward a prosperous and exciting time ahead, and I hope the same for all my friends and family out there.

Of course, I can't finish out the year without showing some sort of art. I'm a little ahead of schedule for my work at IDW, so I'm ending out the year(and starting the next one) with a double page spread I'm creating for the new Transmetropolitan Art Book. It's a fancy new book in which a bunch of artists have been asked to contribute art relating to the world of Transmetropolitan, the comic series by Warren Ellis and Darick Robertson. I've posted just the sketch. I may post the pencils later. If you want to see the finished piece, you have to buy the book! All proceeds from sales of the book go toward the Comic Book Legal Defense Fund and The Hero Initiative. They have a Kickstarter campaign to help raise money for production. Check it out here and consider donating!

That's all for now. Enjoy yourselves, be safe during the holiday, and join me in 2011 as I battle to protect the innocent and destroy evil in all it's forms! 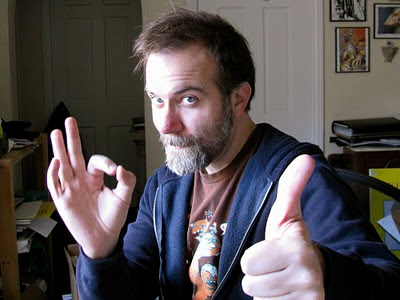 Posted by DaveWachter at 1:10 PM 5 comments:

Why I've been away

As you can see, recently my contributions to this blog have been slim pickings. Also, Guns of Shadow Valley fans are aware that the webcomic has slowed it's production rate. This is because I've had to devote my time to a new gig at one of the bigger publishers. I've been pretty tight lipped about it publicly, but I've been given permission to reveal a few things about it from the publisher. For the last 6 weeks or so I've been drawing and inking pages for a three issue miniseries for IDW, called That Hell-bound Train. It's penned by Joe and John Lansdale and is being colored by Alfredo Rodríguez. It will be solicited some time in March for a May 2011 release. I'll be giving out more details when the time comes, so look out for that. So far, I'm having an immensely fun time working on these pages. It's a great story with lots of cool imagery. I'm also pleased that I'm able to keep up the production schedule, which is always one of my greatest worries. This is my first work for a larger comic book publisher, and I'm incredibly thrilled about it. I view this as a chance to prove myself and I hope that it will lead to more work down the line.

Come next year, as I close out this project, you'll see more sketch posts from me again. Especially as the 2011 convention season warms up. I'm very grateful for everyone who follows this blog, or just stops in once in a while, as well as all the great fans of my webcomic The Guns of Shadow Valley. Have no fear, my pace on these may have slowed, but they are not going away. I appreciate your patience and I hope you all check out That Hell-bound Train when it hits the shelves. Don't worry, I'll remind you again. And again.
Posted by DaveWachter at 11:18 AM 10 comments: